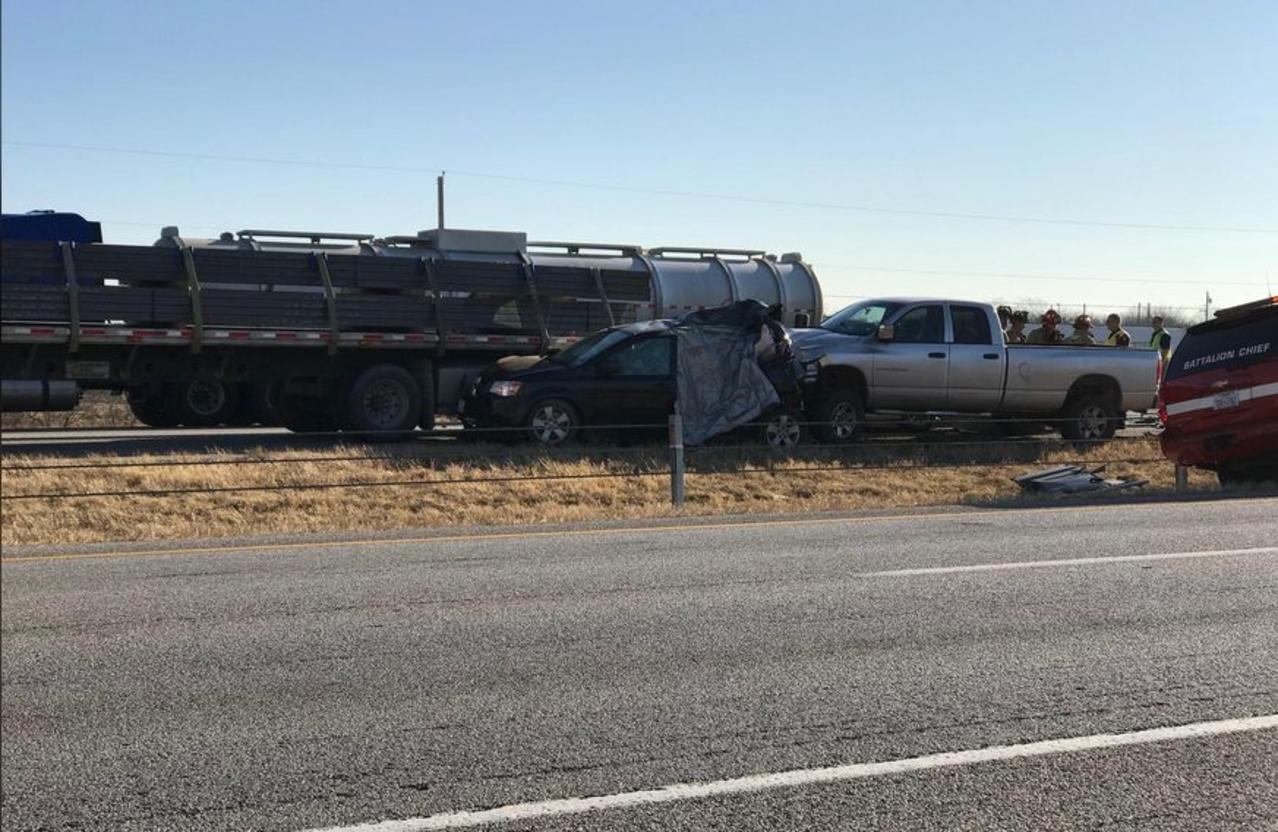 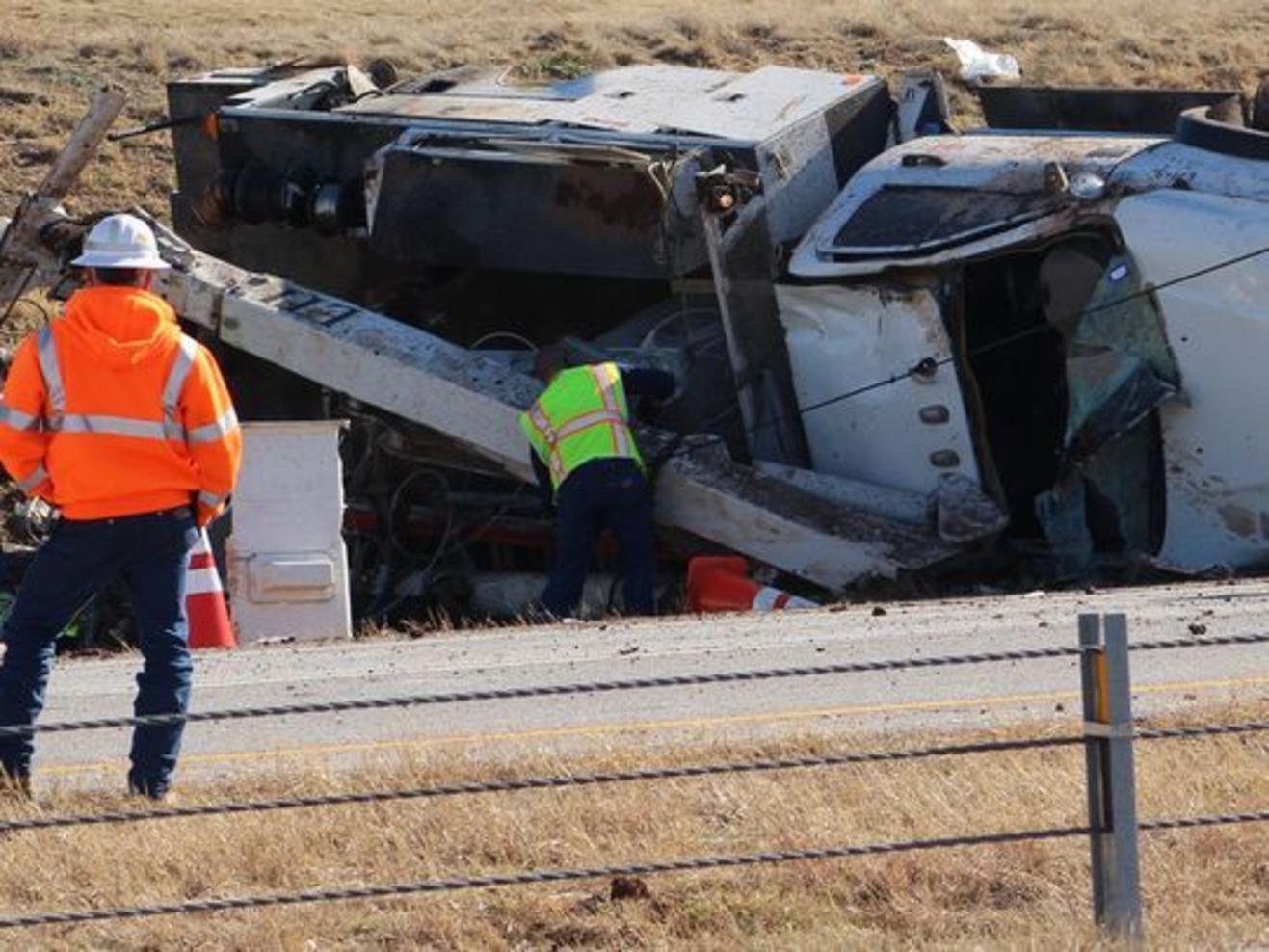 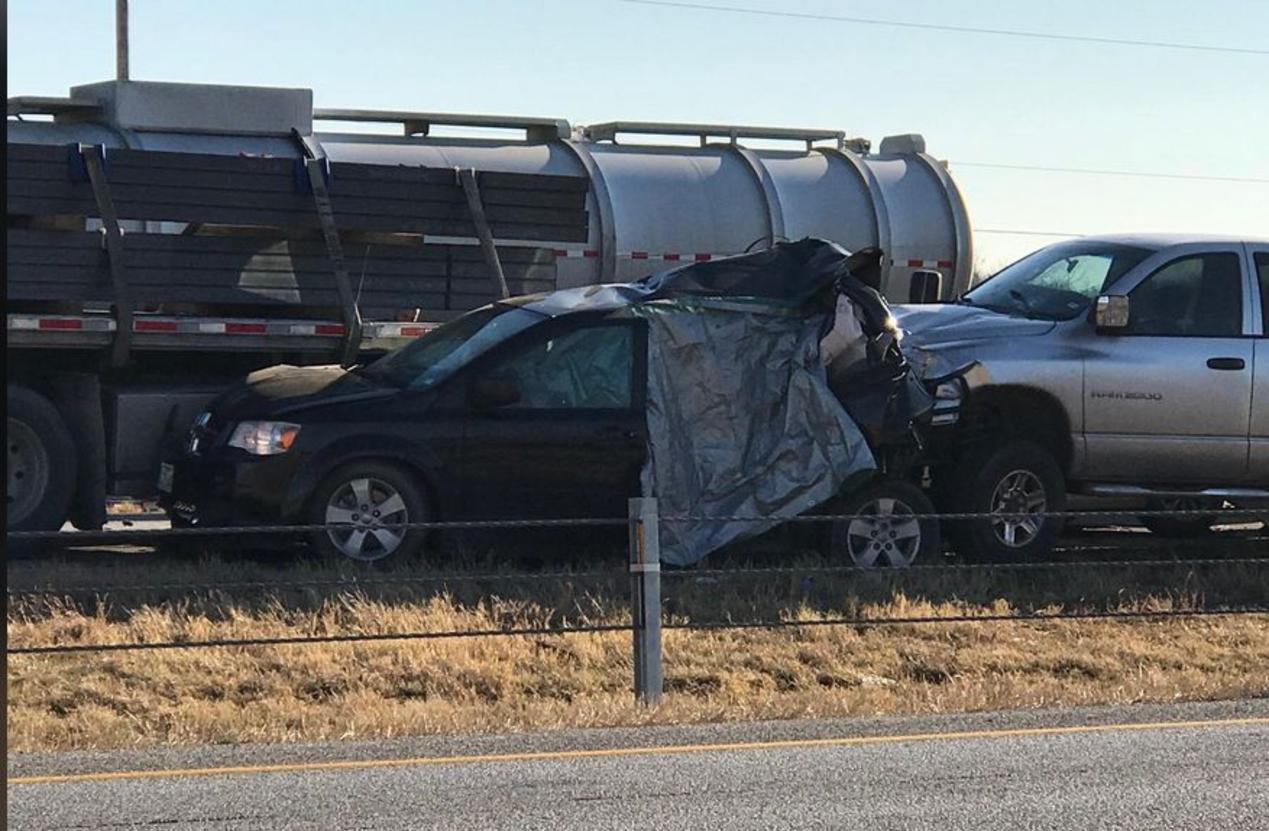 [A truck overturned on westbound Interstate 20 on Friday] Buy Photo

A truck overturned on westbound Interstate 20 on Friday morning, causing traffic to halt and leading to a pileup at which fatalities were reported. (Photo: Greg Jaklewicz/Reporter-News)

The first crash involved an one-ton "bucket" Oncor utility truck whose rear axle sheared off near the Loop 322 exit, according to Standridge.

"The utility truck ultimately loses control and rolls completely off the interstate onto the embankment on westbound lane of Interstate 20," Standridge said.

The driver and passenger were transported to the hospital.

As Abilene police officer Jimmy Woods was driving east of the first accident to slow down interstate traffic, he saw a stopped black vehicle hit from behind by a full-sized quad cab Dodge pickup that "never does slow down," Standridge said.

An Abilene Police Department officer photographs the cab of semi-truck involved in a fatal crash Friday morning on westbound Interstate 20 between the East Business 80 split and Loop 322. (Photo: Greg Jaklewicz/Reporter-News)

The two children in the black vehicle were killed, and the mother driving the vehicle was transported to the hospital for treatment, he said.

"She is expected to live," Standridge said.

Names of the people involved in the accident had not been released by Abilene police Friday evening.

Standridge asked the community to pray for the families involved and to be mindful of the police, firefighters, ambulance services personnel and tow truck drivers who handled the accident.

“You never get accustomed to it, but what you do is you just go into work mode. There’s a ton of work. You process everything through a work model. Is it healthy? Probably not. But that’s what we do,” Standridge said. 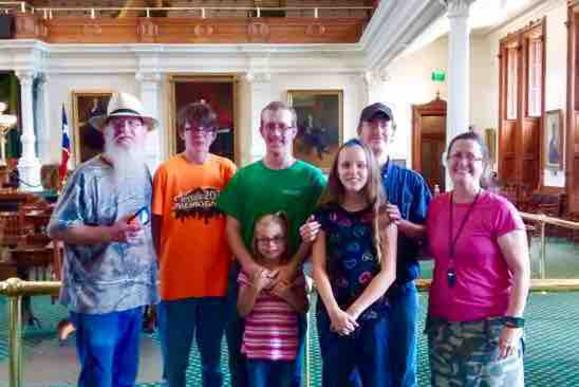 2 young sisters killed in early morning crash on I-20

ABILENE, Texas — It has been a devastating day for many people in the Big Country after two young sisters were killed in a crash on I-20 Friday morning.

"What I know is we have two dead daughters, 11 and 14. We are in the process of making appropriate death notifications," said Abilene Police Chief Stan Standridge.


An emotional Standridge addressed the community this morning at a press conference about the deadly accident, which happened a result of the effects of multiple separate accidents that occurred earlier Friday morning on I-20.

The Abilene Police Department says that the rear axle of a utility vehicle broke off, causing the vehicle to flip over and litter a trail of debris all over the highway.

In order to avoid the violent and messy wreck, traffic on I-20 began to merge into a single lane.

At some point, a tractor-trailer that was carrying steel I-beams came to a complete standstill, which caused a mother traveling with her two young daughters in the back of her vehicle to swerve in order to avoid hitting the big rig.

The woman was able to successfully get to the left of the tractor-trailer, but tragically, her vehicle was rear-ended by a pickup, which crumpled the back of her vehicle and killed her two young daughters.

"(it) strikes the black minivan (or) SUV, I'm not sure, in the rear of the vehicle and just crunches the entire back portion of that vehicle, where both of those kiddos were," Standridge said.

Scott Beard, the senior pastor for the FountainGate Fellowship Church, said that the local community needs to come together and pray for both the city of Abilene and the family members of the crash's victims.

"And certainly, we are going to focus even more in terms of praying for I-20, we just see way too many accidents on I-20," said Beard.

Last year on the stretch of I-20 located between Callahan County and Nolan County, there were six fatalities caused by car crashes.

Friday morning's accident reminded Standridge of the deadly accident that happened on I-20 in August 2017 that took the life of Abilene Police Department Detective Elise Ybarra.

Standridge is strongly urging drivers in the Big Country to drive without being even the slightest bit distracted.

"On this stretch of roadway on the interstate, would you please do nothing else but drive," Standridge said.

A GoFundMe page has been created in order to help the family during this tragic time.

The funds will go towards funeral arrangements, as well as medical expenses for their mother, Jessi, who was behind the wheel at the time of the crash.

In addition, a "Take Them a Meal" page was also created to support the family in their time of need.

We ask a question ...why did the entire wheel assembly and axle fail?  This was the start of this entire episode....because the Axle and Wheel assembly is "Built To A Self Certification" and it has never been tested.

Chain of custody must be established

Time and Time again...and again the insurance companies and this truck company will destroy this evidence 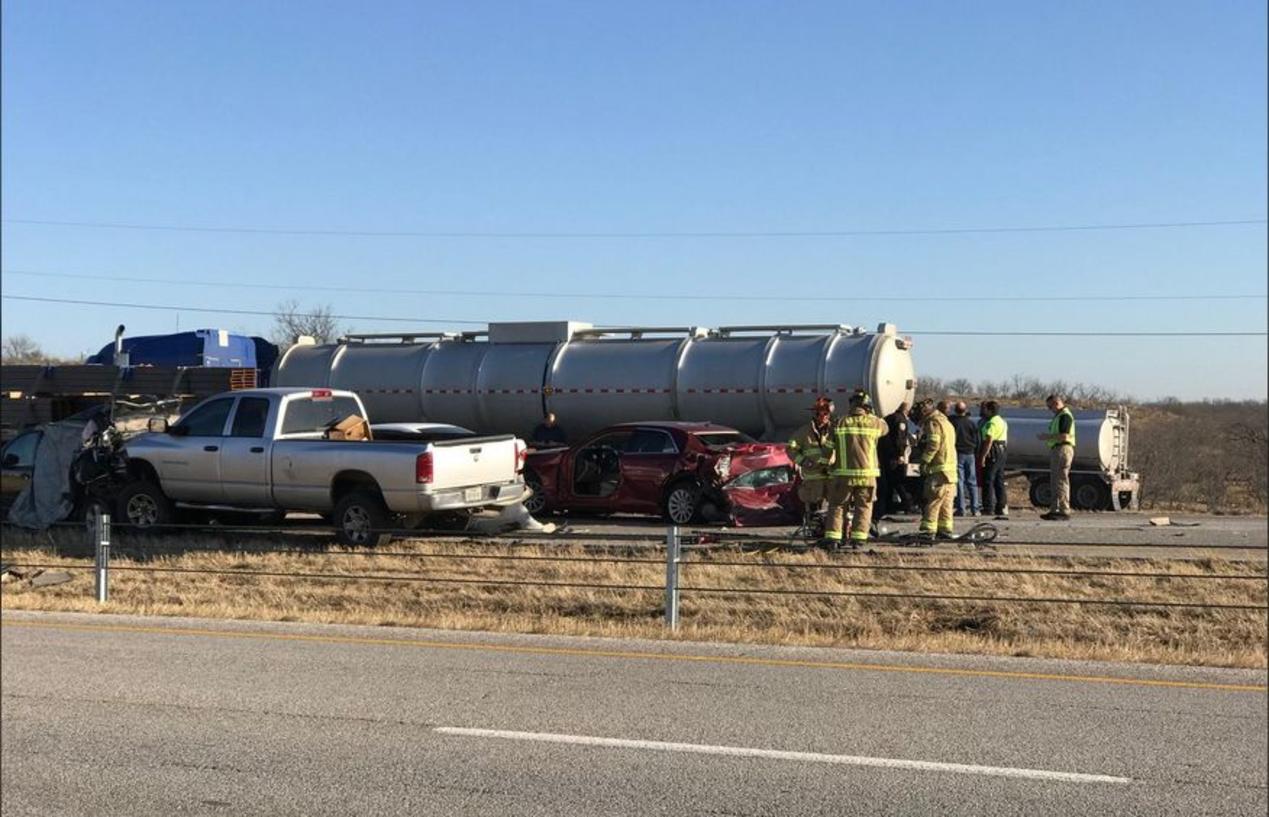 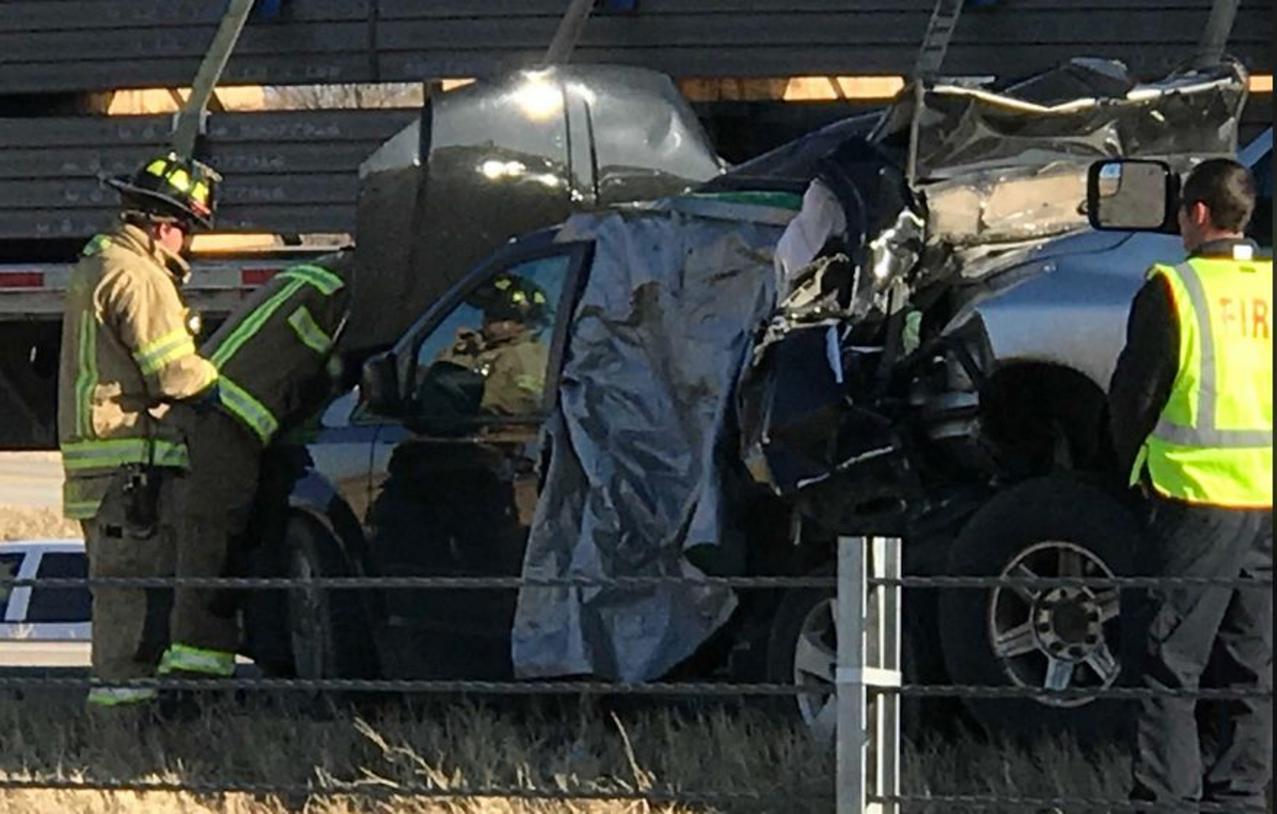 The girls, ages 11 and 14, were killed when their vehicle was rear-ended by a truck while they were slowed to a near-stop due to another accident near mile marker 290 just after 8:15 a.m.

During a press conference Friday morning, Police Chief Stan Standridge said a heavy utility vehicle lost its rear axle and wheels while traveling in the westbound lanes of I-20, causing it to flip then roll off the embankment.

Motorists were merging into a single lane due to this crash when the vehicle containing the children slowed with traffic and was hit by a truck that failed to slow down, according to Chief Standridge.

The children were killed on impact and their mother, who was driving, was transported to Hendrick Medical Center and is expected to survive.

Chief Standridge said the family is from the Big Country, but he is not releasing the identities of the deceased until their loved ones are all notified.

The driver of the heavy utility truck involved in the initial accident was hospitalized as well but is also expected to survive. 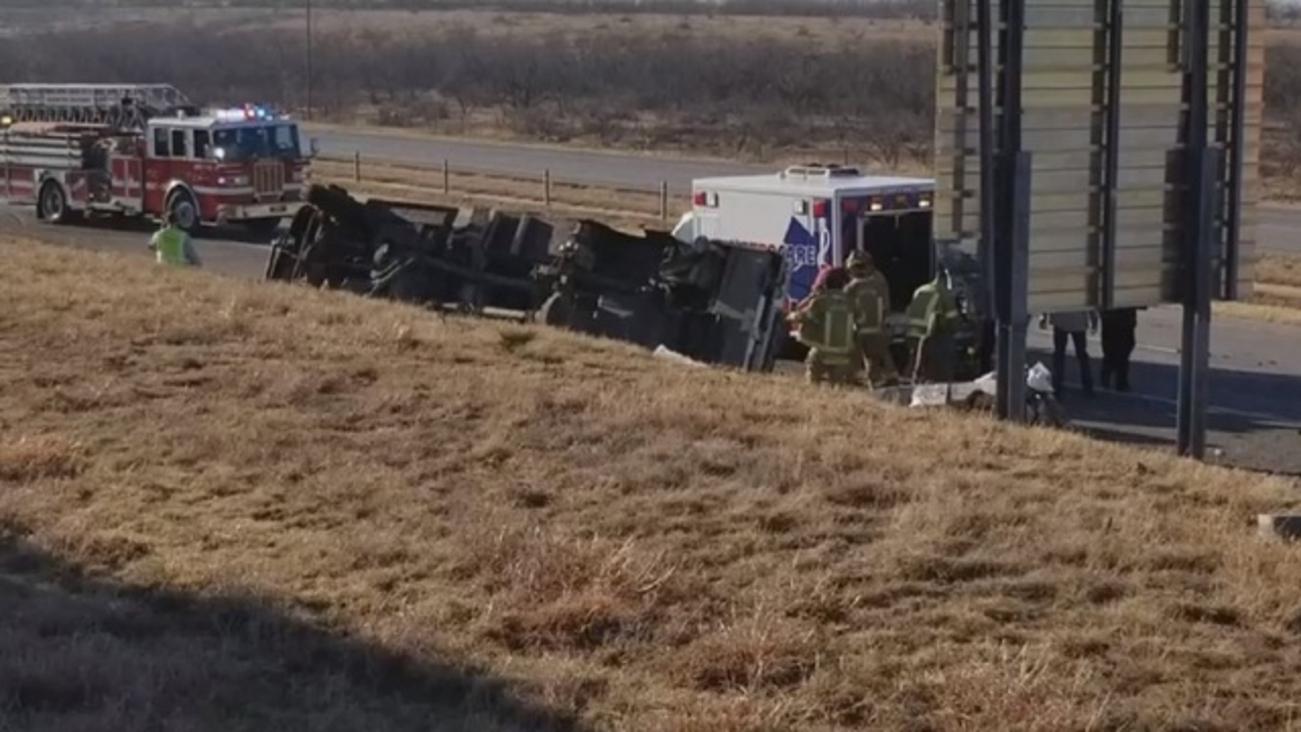 On Friday March 2, a mother and her 2 daughters (ages 11 and 14) were driving on Interstate 20 between East Business 80 and the Loop 322 exit in Abilene Texas when they were met with a multiple vehicle crash ahead of them. As they pulled to the shoulder and waited, a full-sized Quad cab Dodge pickup truck, who made no attempt to slow down, rear ended their vehicle. The children were killed on impact, while the mother was rushed to the hospital for emergency treatment. These individuals were loved by an entire family who are currently praying for the safe recovery of the mother and praying for all the hearts that were broken today. But the love and pain goes so much deeper. We are praying for so much more. In this time of need, they ask for help, love, prayers and support as they battle this very tragic, very sudden, horrible moment in their lives. With funerals and medical expenses looming, we ask you open your heart to this family. The daughters are survived by a father who’s heart is broken and still breaking as he sits with his wife, awaiting her recovery. A mother who will feel the pain for the rest of her life. They are also survived by 3 brothers who loved them more than life. The pain they are experiencing as a family, is something no family should have to suffer. No one should have to bury their daughters and sisters. This family is like no other. They are the most amazing Christians you could meet. They would open their home to you, give you their clothes, food, warmth, and love without question and pray for you no matter who you are or your situation. They preach love and always have their hearts with God. They are a big family with even bigger hearts and so much love to share. The 2 daughters were adopted out of a bad situation early in life by their amazing parents who had no question that these girls were THEIR girls and have had nothing but happiness and love given to them. It is time we give to them what they have given to the world, without question. This should never happen to people like this, but it has. Right now, in the wake of this horrible moment, the best we can do is pray and try our best to make the financial aspect of this as easy to get through as possible.

All donations will go to the Lindley Family who this event directly effects to assist with funeral costs, medical expenses, a new family car (the car involved in the accident is a complete loss) in the future or whatever else they may need while they pick up the pieces and try to move on. 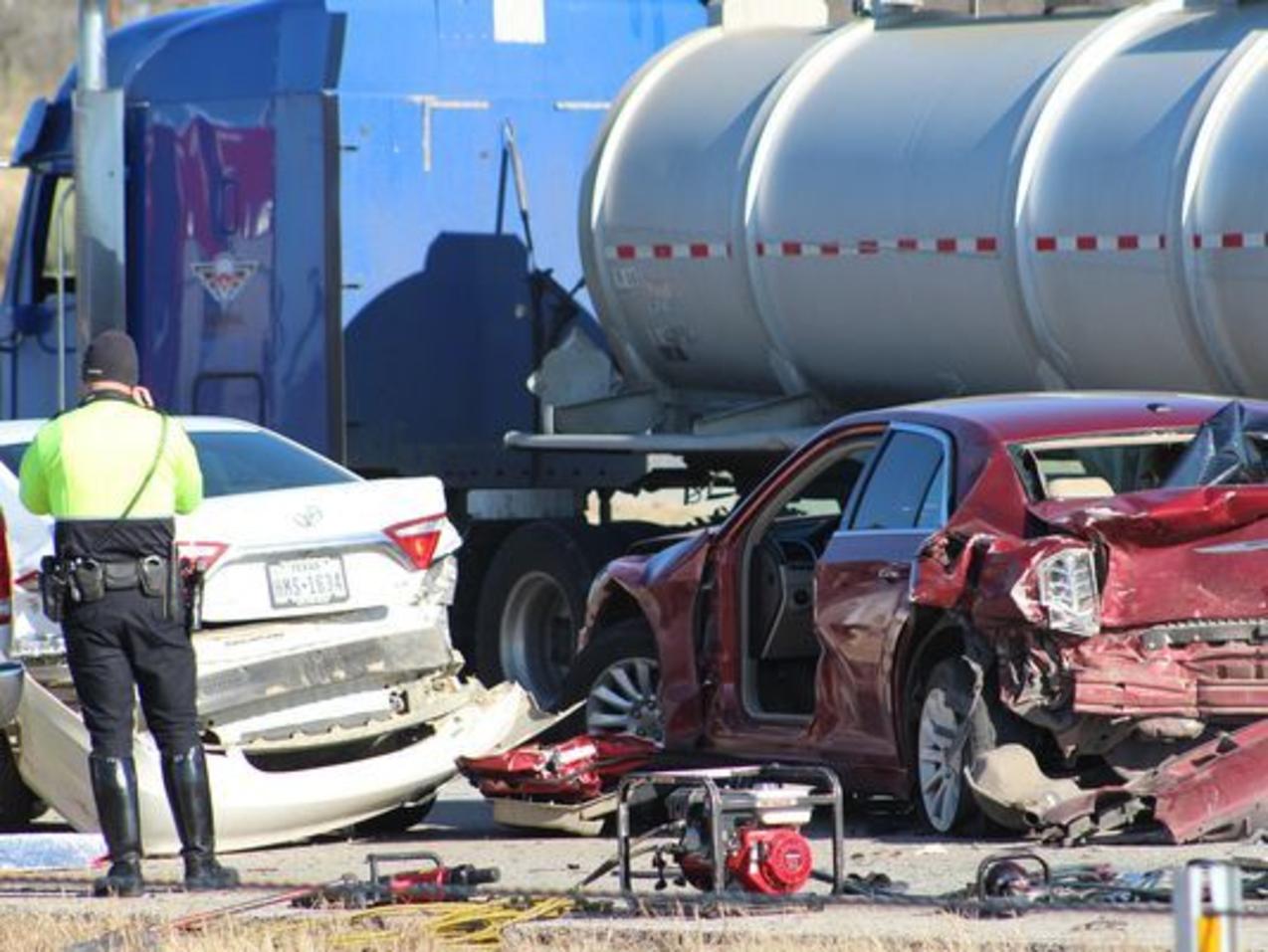