SAN DIEGO (NEWS 8) - Several people were rushed to the hospital Saturday following, what appears to be, a human smuggling attempt.

A horse trailer carrying more than a dozen people flipped over on Interstate 8 near Crestwood Road in Boulevard, prompting Cal Fire to declare the accident a mass casualty scene.

“The units arrived on scene. We brought it to an MPI. At first we didn't know how many patients we would have made contact with. As soon as our number started to grow we went ahead and upgraded the incident to an MCI,” said Battalion Chief Kurt Zingheim with Cal Fire.

Initially rescue workers didn't find anyone at the scene.

A witness told the California Highway Patrol they saw about 20 people run into the brush.

“A search quickly found six of the 20 that needed medical assistance,” said Zingheim.

One of those injured was a pregnant woman who was flown out by a medical chopper.

Another was hiding injured in a remote area so deputies used Copter 11 to hoist them out and take them to an ambulance at the forest service station.

Four others were transported by ambulance.

“When you have patients who don't want to be found, who are hiding in rugged terrain, it takes a while for an organized search to locate them, assess them and bring them up to the highway here to be treated or to be placed in custody with the border patrol agents,” explained Zingheim.

Everyone was given a triage tag to wear around their neck based on the severity of their injuries.

Twelve people were arrested by Border Patrol at the scene. Some were handcuffed together until they were searched and placed into a waiting vehicle.

Border Patrol agents reported that all the individuals were in the country illegally.

Initial reports revealed that 18 people were inside the trailer, which was being pulled by a Ford F250 pickup truck. According to the California Highway Patrol, the truck’s top was ripped off after it overturned. The driver of the pickup truck pulling the trailer escaped. 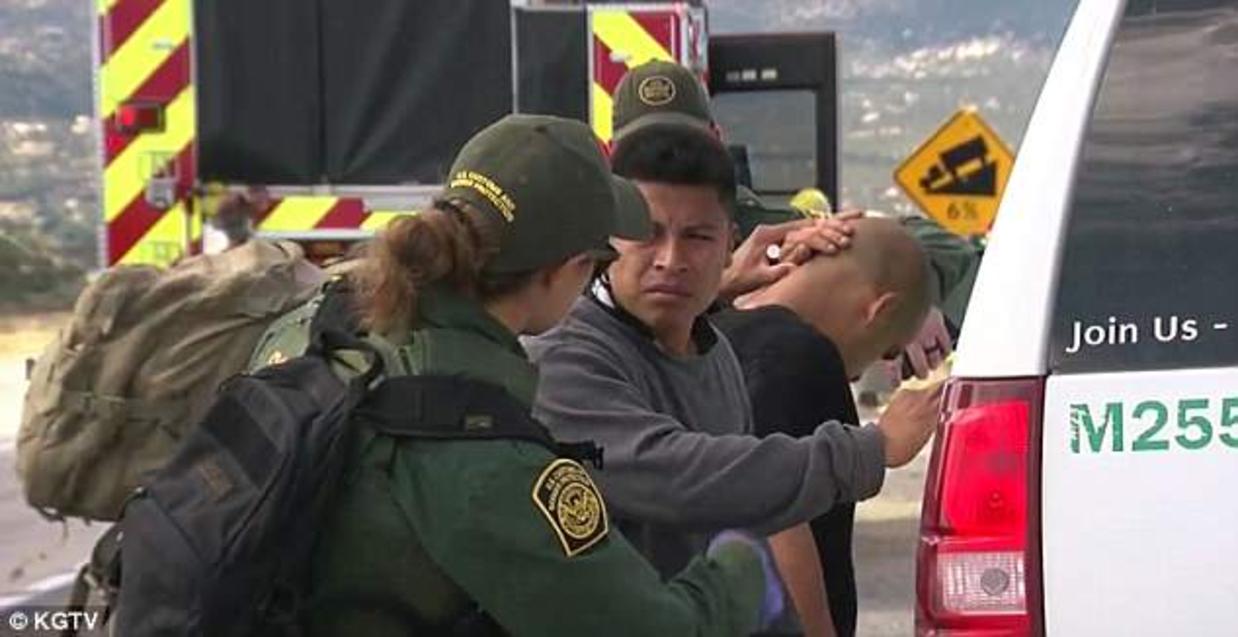 Authorities said that the accident occurred when a female motorist hauling a two-axle, four-horse trailer behind her Ford F-250 began to swerve out of control

The incident occurred around 11.50am in the westbound freeway lanes west of Crestwood Road near in southern California
CHP Officer Travis Garrow said that's when the trailer separated from the truck and tipped over

The incident occurred around 11.50am in the westbound freeway lanes west of Crestwood Road, according to The San Diego Tribune.

Authorities said that the accident occurred when a female motorist hauling a two-axle, four-horse trailer behind her Ford F-250 began to swerve uncontrollably as she cruised the fast lane on the highway.

CHP Officer Travis Garrow said that's when the trailer separated from the truck and tipped over.

The majority of the people inside the trailer were able to emerge from the wreck and scatter into the nearby brush as others laid injured on the side of the road, according to ABC affiliate Channel 10 News.

The Border Patrol was able to capture the undocumented immigrants who had fled the scene following a brief search, said Border Patrol Agent Eduardo Olmos.

It remains unclear if the unidentified driver was detained by law enforcement following the crash.

Two women were air-lifted to a nearby hospital for treatment while four men were transported by automotive ambulance.

According to the Tribune, the injuries sustained in the crash were described as minor to moderate.

It remains unclear how the individuals were able to enter the United States. T nationalities of the undocumented immigrants were also unavailable.

Where Was The Breakaway Cable?

Why...why will the police as they always do cover up the truth and answer our questions?

Six of the 19 had to be taken to area hospitals — including two who had to be airlifted — as a result of the crash, which occurred about 11:50 a.m. on westbound Interstate 8 near Crestwood Road, about 15 miles north of the U.S.-Mexico border.

Passing motorists told dispatchers they had seen more than a dozen people fleeing into a mountainous area after the crash.

The trailer, which was being pulled by a Ford F250, overturned and had its top ripped off, according to the California Highway Patrol.

Border Patrol spokesman Eduardo Olmos said agents have not confirmed the nationalities of any of the people in custody.

Olmos said agents were continuing to search the area for anyone else involved in the crash. 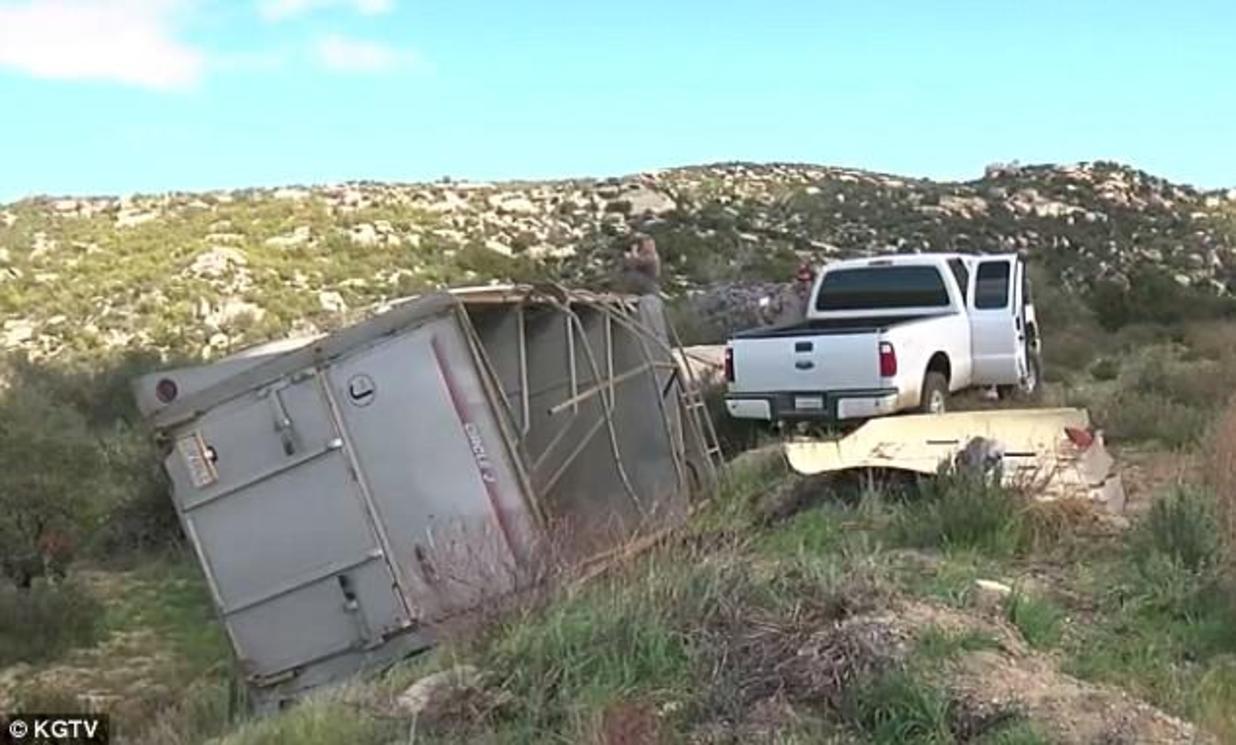 A pickup truck pulling a horse trailer crashed in Southern California on Saturday, injuring more than a dozen people who may have been in the U.S. illegally, according to reports.

The crash unfolded on Interstate 8 near Crestwood, which is located north of the U.S.-Mexico border, a City News Service report on ABC 10 News said.

The Ford F-250 and the trailer that it was pulling got separated while driving and the haul toppled over, The San Diego Union-Tribune reported, citing the California Highway Patrol (CHP). After the trailer spilled onto the road, several people ran from the scene before they were found, officials said.

As many as 20 people were inside the trailer, Cal Fire Battalion Chief Kurt Zingheim said.  (OnScene.TV)

As many as 20 people were inside the trailer and up to 18 received treatment, Cal Fire Battalion Chief Kurt Zingheim said.

Six people were sent to the hospital for medical treatment, The Union-Tribune said, while others received treatment on location and reportedly were arrested.

The identity of the driver wasn’t known, Border Patrol told the outlet, and they didn’t immediately know if the individual was in custody.